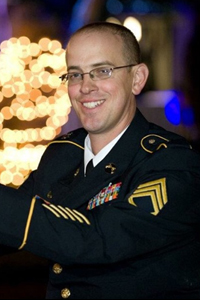 Hello my name is Kye White. I am a Dad of two boys (Born 08/17/2016 and 09/4/2020) of which makes me a stay home Dad. My Wife works in the flooring business and loves her job almost as much as her family. Therefore, we as a family invested in iDeal Floor. My wife and I met after my last tour in Iraq where I sustained a cracked hip, lacerated liver, collapsed lung, moderate brain damage to the front left lob, and later discovered a detached retina. I am a strong believer in our one and only God. I am sharing this so you can get to know me. Anyone interested in helping Veteran’s OATH may call me at (903) 851-5747. If you need to know more about me before investing into Veteran’s OATH, you may also email me at kyewhite@veteransoath.org.

Veteran’s OATH has the goal of 100 rent houses. With this statement I am here for donations. I understand there are a lot of organizations out there and it’s hard for everyone to put their trust and energy into all of them. As of 09/22/2020, I am mowing 4 yards on a regular basis. I am doing odd jobs to help bring in money. I do this to show everyone I am not just wanting a handout.

To keep myself from going insane, by always feeling behind. I have decided to start leaning on events, the post office, and fundraisers. I will continue helping people from time to time. However, I need to spend more time raising my two boys until they start school.

Things we need help with are:

My name is Joseph “Joe” Amodio.  I served in the US Army and the Texas National Guard (TXARNG) for 27 years in many capacities from logistics to combat arms, as a Private all the way up to the rank of Master Sergeant in positions equal to the rank and sometimes above my given rank.  As a Regular Army Soldier from 1986 to 1991, I served as a 57F (Graves and Registration) in Wiesbaden FRG 87-89 and Ft Ord CA 89-91. In 1990 I was deployed to Operation Desert Storm (ODS) with the 8th Evacuation Hospital and operated there just outside of the King Fahad Int. Airport and the 101st Camp Eagle, where our operations were Key in sustaining battlefield injured troops for transport to Germany and the US.  32 days after returning from ODS, I ended my contract with the regular Army and returned home to Houston TX and to my job with Continental Airlines. 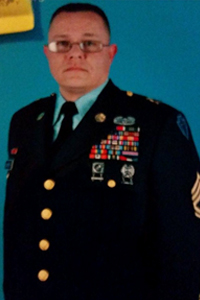 After a year away from the Army, I found myself losing control, becoming disconnected and depressed, and drinking and acting out in ways that were not like the soldier that I was.  My friend, Johnny Newcomb, who deployed with me to ODS, had also ended his contract with the regular Army but he had joined the TXARNG.  He told me that he was worried about me, and that I needed to get my stuff straight.  He invited me to attend a drill with him.  A month later I was enlisted in the TXARNG and attended MOSQ for 19K M! Tank Crew Member.  A year later I was assessed into the Active Guard and Reserve Program (AGR) as a Division Retention NCO.  I served in Delta Co 4-112 AR as a 19K Tank Gunner, and learned so much from my time there that I decided to branch out and change my MOS yet again.  I decided that 19D US Army Cavalry Scout would be interesting, but little did I know that 19D would take hold of my heart and soul and become part of my very being.

I was inducted into a brotherhood the day I was accepted into the detachment, one I thought I already belonged to but had no idea how much deeper this one went.  After a couple of years serving in the detachment, I took a position with A Troop 1st Squadron 124th Cavalry Regiment in Waco, Texas – a true Regiment with historical roots back to the Mexican wars, the honor of being the last MOUNTED Cavalry Regiment, and so much more.  I was with the squadron about a year when we received the call from division to put together a troop to send to Iraq for a special detail mission.  We tasked 187 men from the squadron for the mission, and I received permission to leave my AGR position (it was against regulations at that time to do so without special permission) and deploy with my Guard Unit.  I was assigned as a Team Leader and Gun Truck Commander in 3rd Platoon.  We saw more action in Iraq than most platoons as the NCO’s in our platoon were very strong willed, resourceful, and knowledgeable about combat and tactics.  Alpha Troop served in Iraq with extreme distinction.  We were known throughout theater as those guys from Texas or as THE CAV, and NO, NOT 1st CAV!  Upon returning from Iraq in 2005, I felt myself suffering from PTSD-like symptoms.  I was quick to anger, aggressive, hyper vigilant, didn’t sleep, and I MISSED COMBAT!  My squadron came up for a mission to Egypt Multi Force Observers (MFO).  I volunteered immediately and secured my position as the Convoy and Security NCOIC, responsible for all route reconnaissance, surveillance, and security as well as all convoy security. The MFO Egypt Mission went off without a hitch, except at the end I began to suffer from anxiety and sleep deprivation, and I could not deal with the locals that worked in our camp in a civil manner.  When we returned to the US, I admitted myself to the hospital for a 72 hour watch because I didn’t know what I was feeling and couldn’t make a coherent decision.  After I was released, I started counseling weekly for about 4 months and I thought I was doing well, though it was unconfirmed.  Then my squadron was called back up to go to Iraq once again to take over operations in Baghdad.

I left less than six months later and was back in the hate and discontent of Iraq where I felt comfortable with my troops and my mission, serving with 127 troops in my platoon, owning 6 entry control points, and providing 24 hour security and presence patrols for two separate villages as well as “SPECIAL MISSIONS” with 5th Special Forces Group.  We were quite busy and gladly so.  In December, I was injured at a checkpoint and suffered from that injury for two months with my senior medic treating me with trigger point shots and other things until I woke up and did not have the strength to pull the trigger with my shooting finger.

I was medevac’d to Germany where it was determined that I had a cervical break as well as a lumbar break and would not be returning to Iraq.  I was devastated, but had to focus on healing.  I was assigned to Ft. Sam Army Hospital for recovery and was attending a briefing one day when I heard someone saying my name “SGT. AMODIO” over and over.  I looked up at one point and saw an emaciated kid in front of me, and he looked somewhat familiar but not enough to recognize right away but a little.  Well he stepped forward and said, “Hey SGT Amodio.  It’s me KYE, KYE WHITE from the CAV!”  I was like, “Holy crap, man!  What the hell happened to you, bro?”  He told me his story and asked what happened to me, so I told him my story.  We just hung like we hadn’t missed a day since last time we had seen one another, when in fact it had been almost a year.

After returning home from the hospital at Ft. Sam, Kye was medically retired.  I got the Army to return me to full duty and had not seen Kye in over 4 years when he called me one day and asked if I had a minute to talk.  Kye told me about his dream, OATH, and how it hit him.  I could hear it in his voice that this was something that was fierce in his heart.  When he asked if I would consider being an advisor to this organization, I was a little leery.  I do not consider myself the kind of person that you would want advising you on much other than taking over a village in a hostile country or setting up good security and surveillance positions in combat.  I asked Kye if he was sure he wanted me for that, and he said yes and explained to me why.  It kind of made me feel weird.  I never think of myself in those terms, but I would not let him down.  If it was his dream, I would do what I could to make it come true for him.

Every member of the Organization are brothers from Alpha Troop 1-124 Cav.  We have all served under fire together, in fear together.  We have all watched each other’s backs, and we complement one another.

Kye is the kind nurturer.  James is the understanding, but hard father type.  Andy is the quiet, but ready to act at the drop of a hat guy.  Clark is the funny, smart, and reliable friend who will set you straight when you need it.  I am the guy that is hard all the time.  I can see the good and the bad in people and situations, and I will always be the one to sway the team to be cautious and defensive.  I am the protector of my brothers.  No one will ever hurt one of you in any way if I call you BROTHER!